The Day the Coffee was Cursed 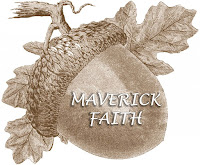 It was March of 2010 in Georgia and it was particularly cold and wet. I had just started a new on-air job with a non-profit Christian radio station and one of the first major projects I was involved in, outside of the studio, was the building of a new frequency from the ground up. We were literally constructing a radio tower a few hundred feet in height. It takes special skills to construct a FM radio tower and for that we called in an outfit from South Carolina. A rough group of guys.
It was funny to watch them try and curb their language when the owner of the station was nearby. After all, he was a Christian man and Christians don't take too kindly to cussing -- so they thought. Me, on the other hand, I struggled with a lifetime exposure to "foul" language. It was pretty much the norm growing up in New England. Often I was excoriated for "corrupt communication" that would slip past my teeth in moments of frustration. A work in progress...that is still me.
On this particular cold and wet day, I couldn't wait to warm up with a cup of hot coffee and some burgers at the local McDonald's. This day was even better because the station owner was going to spring for all of our lunches.
The time came and we all sat down at a table ready to dig into our meals. I don't know exactly what I was reaching for when I inadvertently spilled my coffee all over one of the tower guy's lunch. That's when I let it fly..."Oh, sh*t!"  Immediately my eyes bugged out and my hand hastily covered my mouth as if to reach for the words and shove them back in my gullet. That's when I turned to my boss, the station owner, and profusely apologized. He smiled and grabbed some napkins to help clean up the mess. I didn't realize until much later that he never heard the cuss word and thought I was just apologizing for the mess.
The tower guys, though, busted out with laughter and they kept bringing it up all throughout the day. That Christian radio guy swore in front of his boss! It was an instant connection with them and they loosened up around me...like they felt the pressure dissipate and saw first hand that none of us are perfect.
Was my errant cuss word the "corrupt communication" the Bible encourages us to avoid? Maybe, but it brings up a good point. I'd rather be around an honest cuss, than a clean talking scoundrel. While I'm not going to advocate cussing...how many of us take pride in our clean language, yet we engage in gossip, slander, lies, and half-truths? Do we go around to non-Christians and make them feel guilty for cussing while at the same time they observe our lack of love for another in the way we treat folks behind their backs?
We are being watched by the world. They may laugh if we slip up and let some PG words fly...the real damage is done when we pick at each with words that carry a G rating. Corrupt communication doesn't always need to be bleeped. Think about it.