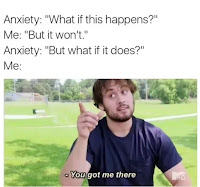 It's been said that anxiety is like a conspiracy theory, but about yourself. I have no idea why I woke up this morning with a desire to read Philippians 4:6-7. Was it a conspiracy that this passage was also the subject of discussion in our Sunday school class too?


Do not be anxious about anything, but in every situation, by prayer and petition, with thanksgiving, present your requests to God. And the peace of God, which transcends all understanding, will guard your hearts and your minds in Christ Jesus.

I've struggled with anxiety all my life, but thankfully I've lived long enough that when the anxiety gets real bad...I remember past victories. During our Sunday school discussion, one particular victory came to mind.

It was 2010 and I had the opportunity to take a radio gig in Atlanta, GA. At the time, I was living in Tupelo, MS -- but for some reason I always had this desire to live in Georgia. This was my chance. The only obstacle was selling my house during one of the worst economic downturns this country had seen since the Great Depression. I remember telling myself that if the Lord was moving me to Georgia, he would sell my house.

I had to start the new job in February, so the plan was to leave my wife, our four-year-old, and new born daughters in Tupelo until the house sold. The weeks dragged out. The anxiety kicked in and I was miserable. Why would the Lord move me to Georgia and then not sell my house?

One one particularly anxious day, I was finishing my drive-time show prep and just sat at my desk and told the Lord I was going to hand all this anxiety over to him. The first song to play on my shift was Steven Curtis Chapman's "Believe Me Now".  Right after that song ended, the studio phone rang and the voice on the other end asked if this was that guy Pete who had a house for sale in the Tupelo, MS area. Turns out this caller had googled my name and saw that I was working for this particular Atlanta radio station. The next words out of his mouth were, "I want to buy your house." He did.

Anytime I get particularly anxious, I always remember that story. If you are anxious right now...I'm including the video for that Steven Curtis Chapman song that played on my afternoon show.